Horr B. Yazid al-Riahi al-Yarbuʾi al-Tamimi (d. 61/ 680), a leading tribesman in Kufa, who obeyed the orders of ʿUbayd-Allah b. Ziad by intercepting Hussain b. ʿAli and his party and leading them to Karbala, but later repented and fought on Hussain’s side which led to Horr’s martyrdom on the 10th of Muharram, Ashura. He is regarded as the symbol of hope in repentance which ensures his salvation. 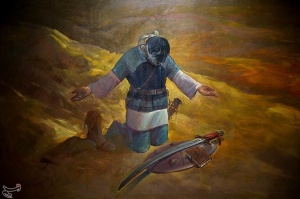