One of the most famous Maqtals is Nafas al-mahmūm (Arabic: نفس المهموم) by Sheikh Abbas Qomi, which is very important due to the type of narrative citations as well as its special and general popularity.

At the beginning of the book, its full name is mentioned as follows: “Nafas al-mahmūm fī maqtal sayyidinā l-Ḥusayn al-maẓlūm”[1], but at the end of the introduction, the author  refers to  his book as follows: "I called it Nafas al-mahmūm fī muṣībat sayyidinā l-Ḥusayn al-maẓlūm”.[2]  This name is taken from a hadith of Imam Sadegh who said: "The breath of one who grieves over our oppression is Dhikr. (In religious terminology, it refers to remembering God.) Grief over us is worship." He then said: "It is obligatory that this hadith be written in gold."[1] 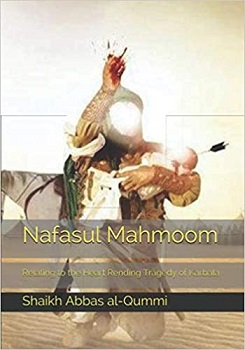 The Persian translation of this book was published for the first time in 1327 (SH) in Tehran under the title of Dam' al-sujum.[5] After that, various publishing houses have published that book with different titles such as the original text[6], translation[7] and excerpts[8] from 1331 to 1399 (SH)[9]. This book was translated into English under the title Nafas al-mahmūm: Relating to the Heart Rending Tragedy of Karbala, by Aejaz Ali T Bhulwala and published by the CreateSpace Independent Publishing Platform in 2014 (AD).

One of the features of Nafs Al-Mahmum is the use of various sources in compiling it. The  author’s method for referring to the source is that the source name is placed at the beginning of the quote and is followed by the text of the quote, which is usually very long.[10]  In many cases, either the text presented in the book has no source or it is so long that its source cannot be determined correctly.

In a part of the book Nafas al-Mahmum and under the subtitle "Conditions and rules of hadith narration", the author writes about the narration of invalid hadiths by the preachers on the pulpits as follows: "The authorities are asked how should be the narration of suspicious events such as Muslim children, the wedding of Hazrat Qasim, the story of Fatemeh Soghari and the chicken and other similar cases?” In response, we say that if the narrator attributes the case to the book he has quoted from  and does not pretend to the listener that it is certainly correct, he is not at fault. Because most people do not understand these rulings, it is necessary to mention a few issues for the reader so if the narrator is not a mujtahid himself, he should refer to the mujtahid, and this is also one of the issues related to taqlid.[11] In the following, the author states the most important criteria that must be observed to narrate a narration by preachers. That is why Abbas Qomi makes inefficient effort to prevent the inclusion of invalid narrations in his book[12], which is due to the excessive use of Biḥār al-ʾAnwār Majlisi.[13] The poems quoted in the book are mainly in Arabic without translation and in some cases in Persian.[14]

The book consists of an introduction, five chapters and a conclusion, and a biography of the author (by his child) at the end of the book. Introduction to the book Nafas al-Mahmum begins with introducing the sources used by the author and continues with description of events related to the birth of Imam Hussain. The first chapter of the book consists of two parts. The first part mentions the manaqib (good features) of Imam Hussain and the second part is dedicated to expressing the divine reward of weeping over the calamity of that Imam and the divine reward of damnation his killers and the events regarding his martyrdom. This purpose is accomplished by narrating forty hadiths in that part.[20]

The second chapter of the book, consists of twenty-two chapters, is dedicated to narrating the events after the people swear allegiance to Yazid ibn Mu'awiyah until the martyrdom of Sayyid al-Shuhada, and constitutes the longest part of the book Nafas al-Mahmum. The issues raised in the following parts indicate the efforts of Abbas Yazdi to show the events after the death of Mu'awiyah until the martyrdom of Imam Hussain as accurately as possible.

The twenty-second part of the second chapter of the book Nafas al-Mahmum is the most important part of the book, during which the author describes the martyrdom of Imam Hussain in Karbala. The chapter begins with such phrases: “This is the part that sheds tears from the eyes and refreshes sorrow and kindles the fire of sorrow in the heart of the believer.”[21]

The third chapter of the book (including fourteen parts) explains  the events after the martyrdom of Imam Hussain. In this chapter, as in the previous parts of the book, some parts have independent titles, such as the second part on looting furniture and mourning of the Ahl al-Bayt,[22] the fourth part about mentioning the events of Ashura[23] evening and the twelfth part which mentions a few incidents on the way to Levant.[24] In general, almost all parts of the third chapter have main titles and sub-thematic titles. Being the most detailed part of the third chapter, part thirteen[25], is related to the arrival of the Ahl al-Bayt to the Levant, and the following topics are  discussed there: Description of the Bab al-Sa'at in Damascus, the arrival of the Ahl al-Bayt to Levant, Ahl al-Bayt in Yazid's Gathering, Sermon of Al-Sayyida Zaynab (a) in Yazid's Gathering, Ibn Abbas's letter to Yazid, The blasphemy of the Damascus preacher to the Prophet's family, the dream of Al-Sayyida Zaynab,  About the death of the Imam's youngest daughter in Levant, Sayyid Sajjad's sermon in Levant, Yazid's family crying over the captives and Yazid’s  Regret for killing Imam.

The general subject of the fourth chapter of the book is the narration of the events and happenings after the martyrdom of Imam Hussain. According to the titling of the book, the fourth chapter has two parts with the titles: "The weeping of heaven and earth" and "Angels cry to God Almighty". But in fact, there is a third part in the third chapter, under which poems and lament are quoted in Arabic.[26]

In the fifth chapter, the author of the book provides explanations about "Hussain's children and his wives, the divine reward for visiting the shrine of Imam and the oppression of the caliphs over his grave" in three  parts.[27]

At the end of the book, the events of the uprising of Mukhtar and the blood feud of Imam Hussain and their fate are examined.[28] Finally, the two-page writing of Ali Mohaddeszadeh in Rajab 1369 AH / 1327 SH about the author's biography is the end of the book.

In a general way, many of the parts in the book that fall under the chapters lack an independent title. But for some of them, the author has given an exact title. The importance of the material presented in a part seems to be a reason for the author to place an independent headline for that chapter. Because the sixteenth to twenty-second parts of the second chapter, which include the most critical moments in the Karbala uprising and a detailed description of the martyrdom of Imam Hussain and his companions, all have main and even sub-headlines.

The value and importance of books[edit | edit source]

Nafas al-Mahmum is the first important book of Sheikh Abbas Qomi in the field of Ashura researching[29] and one of the most comprehensive Maqtals of Imam Hussain. The author of the book, by using earlier writings and by making extensive use of hadith sources such as Bihar Al-Anwar has fulfilled his request regarding the compilation of a detailed and comprehensive maqtal of Imam Hussain and the Ashura event. Ali Davani praised Nafas al-Mahmum and called it "the last, best and most famous Shia’s Maqtals.”[30]