Biḥār al-ʾAnwār al-Jāmiʿah li-Durar ʾAkhbār al-ʾAʾimmah al-Aṭhār Written by Mohammad Baqir bin Mohammad Taqi Majlisi (1037-1110  AH), is the full title of a book known as Bihar al-Anwar (the Seas of Lights) in the Islamic world. A collection that has been provided using more than four hundred hadith sources in 2489 chapters[1] and the event of Karbala and the Ashura Movement are  the most important topics discussed by Majlisi in this book.

Mohammad Baqir bin Mohammad Taqi Majlisi was born on the last day of 1037 or the first day of 1038 AH[2] and died on the 27th of Ramadan 1110 AH in Isfahan.[3] Allameh Majlisi's writings are divided into two categories: Arabic writings and Persian writings. In the first group of writings, except for Bihar Al-Anwar, there are Meraat Al-Oghool (means Mirror of Intellects)[4], Sharh al-Arba'in, Risaleh al-Iqiqadat, and al-Masa'il al-India. But from the second group and the Persian writings of Majlisi, we can mention Zad al-Ma'ad, Hayat al-Qulub, Jala 'al-Ayoun, Haliya al-Muttaqin, Ain al-Hayah, and Haq al-Yaqin.[5]

Biḥār al-ʾAnwār al-Jāmiʿah li-Durar ʾAkhbār al-ʾAʾimmah al-Aṭhār contains a collection of news, hadiths, stories and chronicles that have been narrated from the Holy Prophet and the Imams by narrators and scholars who have quoted them in their books before Majlisi. Among these, Al-Kutub al-Arbaʿa (Four Books) are exceptions and have not been quoted in  Biḥār al-ʾAnwār.[6]  The Arabic text of the book Bihar Al-Anwar has been published many times by publishing houses in Arab countries.[7] The Persian translation of Biḥār al-ʾAnwār has been published several times in Iran.[8]

Allama Majlisi started writing and collecting Shia’s hadiths in 1072 AH and continued for thirty-six years. Preparing the fair copy of this collection took many years and was continued by his students even after the death of Majlisi. Majlisi first compiled the Biḥār al-ʾAnwār in twenty-five volumes. Then he divided the fifteenth volume into two. Hence, the volumes of Biḥār al-ʾAnwār are twenty-six and a total of forty-four books and 2489 chapters.[9]

In the initial volumes compiled by Allama Majlisi and in his time, the second and third parts of the tenth volume and the second part of the twenty-second volume of Biḥār al-ʾAnwār are about the life of Imam Hussain (P.B.U.H). However, in recent editions of the book, the above mentioned subject, the narration and news related to the biography of the Imam's uprising, the Karbala incident, and the Ashura Movement, are covered in some parts of Volume 44 as well as the full text of Volumes 45 and 98. That’s why, usually half of the forty-fourth volume and the whole of the forty-fifth volume are called the Maqtal of Biḥār al-ʾAnwār. This division does not include the part of the ninety-eighth volume of the book (Mazar/Shrine) which starts from the eighteenth chapter and continues until the forty-ninth chapter and is dedicated to the pilgrimage of Imam Hussain (P.B.U.H).[10] The subject of this article is that part of Biḥār al-ʾAnwār which is known as the Maqtal of Biḥār al-ʾAnwār and is directly about the biography of the Imam and the events of Karbala.

Regarding how the sources were used, Allameh Majlisi's speech at the beginning of Chapter 37 (Volume 44) is expressive enough. At the beginning of that chapter, which is in fact the beginning of the narration of Ashura and the uprising of Karbala, Majlisi expresses his method of working as follows: "I will first quote these horrific stories from Saduq. Then it is taken from the books like Ershad written by Sheikh Mofid, Malhouf by Seyyed Ibn Tawus, Muthir al-Ahzan by Ibn Nama, Muqatil al-Talebin by Abolfaraj Isfahani, narrations of Muhammad ibn Abi Talib Husseini in his Maqtal book, the writer of which is from Imamiyya or Zaydiyyah and I have a correct copy of it, Muruj al-dhahab by Mas'udi, who is one of the Shia scholars, Manaqib written by Ibn Shahr Ashob, Kashf al-Ghamma and other books that we will mention. Then I end this book with miscellaneous news."[11] In addition to quoting narrations and hadiths, during the pages of Biḥār al-ʾAnwār, Majlisi has repeatedly used Quranic verses.[12]

The method of presenting the content is such that in most cases, first a collection of hadiths and narrations about a subject or an event is quoted and then the translation of that collection is presented in the same order in the continuation of the text.[13] While quoting narrations and hadiths, Allameh Majlisi has also validated many of them in Bihar Al-Anwar.[14] 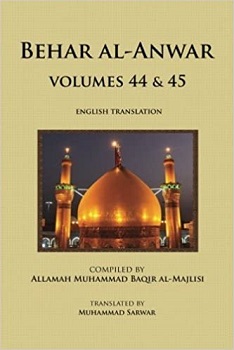 These two volumes of Bihar were translated by Muhammad Sarwar in English and has been published by Islamic Seminary Incorporate.

The section related to Imam Hussain (P.B.U.H) or the Maqtal Al-Hussain (P.B.U.H) in Bihar Al-Anwar, continues in the biography of Imam Hassan and begins with chapter 24 with such phrases.[15] Imam Mohammad Baqir said: When Imam Hassan was dying, he said to Imam Hussain: O brother, I bequeath to you, when I passed away, prepare my body and take it to the shrine of my grandfather, the Messenger of God, Mohammad (P.B.U.H) to renew the covenant with him. Then take my body to my mother Zahra. "Then take my body to Al-Baqi' and bury it there."[16]

In this regard, and in the words of Muhammad ibn Hanafiyyah, in honor of Imam Hussain, it has been narrated: “Hussain is the most knowledgeable and his patience is the most and his closeness to the Prophet Muhammad is more than us.” Imam Hussain was an Imam before he was created, and he recited the revelation of God before he spoke."[17]

The general contents related to Imam Hussain (P.B.U.H) in volumes 44 and 45 of Bihar Al-Anwar are as follows:

1-     Biography, expression of the spiritual degrees of Imam Hussain and the martyrs of Karbala and predictions related to the events of Karbala and Ashura (Chapters 24-36, Volume 44)

4-     Expressing narrations and laments on the greatness of the martyrdom of Imam Hussain (Chapters 40-44, Volume 45)

5-     Punishments of the killers of Imam Hussain and other martyrs of Karbala, the situation of Imam’s children and the Mokhtar uprising and the behavior of the caliphs (Chapters 45-50)

As a result, the narrations related to the events of Ashura and Karbala are presented only in Chapter 37. This chapter begins with the translation of a detailed text from the book of Al-Amali of Sheikh Saduq,[18] in which the events after Mu'awiyah's death, the departure of Imam Hussain to Kufa, his arrival in Karbala, and the martyrdom of Imam (P.B.U.H) are described in a completely cataloged manner. Then other narrations of the uprising of Imam Hussain by Sheikh Mufid (Al-Irshad ), Sayyid Ibn Taws and other Shiite scholars up to that time are stated.[19]

After narrating the events of Ashura and the return of the caravan of captives to Medina, Majlisi has included the narrations in honor of the martyrdom of the Imam under five chapters (40-44). During what was said in Bihar al-Anwar about Imam Hussain, Majlis did not refuse to include poems about that event. For example, the whole of Chapter 44 (Volume 45) is devoted to presenting such poems.[20]

The value and importance of books[edit | edit source]

The book Bihar al-Anwar in general, as well as that part of the book which is about the event of Karbala and Ashura, is considered as one of the most important research sources for the authors of the Maqtals and the tragedy letters and other books and treatises related to that event in the following centuries. .