Siyavash is a prominent figure in Ferdowsi's epic, Shahnameh. He was a legendary Iranian prince whose innocence was proven by passing through fire. Thus, he is a symbol of innocence and purity in Iranian culture.

«Savosh» or «siyavakhsh» (in Pahlavi language) or Siyavarshan (from Avesta), which literary means “the one with black stallions”, is the name of an Iranian prince and a famous legend, the symbol of oppression, purity, honesty and chivalry. Abolqasem Ferdowsi narrated his story in Shahnameh (the book of kings). According to ferdowsi’s narration, Siyavash is the son of Kavous , the Iranian Shah, and a Turanian mother whose name in Shahnameh is unknown. In the early stages of his life Siyavash was accused of committing an immoral act, so with the suggestion of the Mubeds he was to pass through a burning fire in order to prove his innocence. Of course Siyavash came out safely and alive and his chastity was proven. 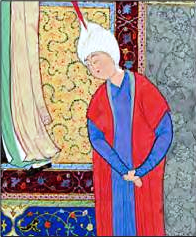 painting of Siyâvash in the Shahnameh of Shah Tahmasp

At the end he was innocently killed by the hand of the treacherous enemy. According to the pre-Islamic texts, the mourning of Siyavash, called «Siyavohân», has been celebrated every year. Bassed on historical texts, from the Siyavash’s blood that has been shed unjustly, a plant grows named «par-e-siavoshan» (maidenhair), which “no matter how many times they cut it, it just grows back again”. So Siyavash is also known as the symbol or vegetation deity. Even the name of Siyavash (the black man) is linked to the life and death of the vegetation deity, because the color of his face is the sign of his return from afterlife . Also the plant of «par-e-siyavoshan» is the sign of afterlife. Afterlife could be considered the same as the Greek underworld; Hades. After of arrival of Islam in Iran, Siyavash remained in the Islamic-Iranian culture, and was reproduced in the status of new legends including Imam-Hussein. In the popular culture, he has been compared to Joseph for his chastity, and to Iranian martyrs for his defense of the homeland, innocence and being killed innocently.