Rasoul Mirza Ali (born in 1967) is an Iranian Pardekhan who started Pardekhani from his childhood. He was trained by Hassan Mirza Ali, his father. 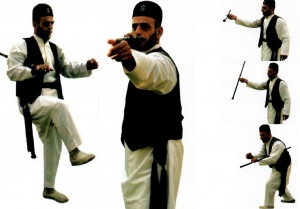 If for the Pardekhans (curtain-storytellers) in general, the three original modes of performances are taken into consideration, Morshed Rasoul Mirza Ali belongs to the second group. The aim in this kind of performance is not necessarily the conservation of the relation of the performer to the content of the performance, because the singing of Pardekhani is a kind of profession. Therefore, what is performed is more techniques which have become rational.

The narration is of the Deer Keeper. A hunter hunts a deer. A pure-hearted Seyyed releases the deer so it could give milk to its young. The hunter said, the deer may escape, then I will have lost my wife and children's bite to eat. The Seyyed gives him his camel, ring and other possessions in exchange for the freedom of the deer. The hunter ties the hands of the Seyyed to be sure of his prize. When the deer reaches its den, it sees a wolf. The wolf had fed the deer's children while the deer had been away. The period of freedom of the deer ends, and it returns with its two children to the hunter along with the wolf. The hunter is astonished when seeing the friendship between the animals and the Seyyed. The Seyyed suggests to the hunter to never hunt again, and the hunter is contemplating the possibility when he sees that the stones of the desert have turned into jewels, just as the Seyyed had said.