Qasem Hemmati (born in 1957) is a prominent Pardekhan who started Pardekhani when he was 10 years old. He had several mentors including his father, Darvish Hossein Hemmati, and his brother.

Use of quick and various motions and indicating all the postures of the content of the story, such as showing respect, prayer, indicating to a far place or other directions, getting on a horse and horse riding, shooting an arrow from a bow, leaning on a cane, countless references to the curtain and audience contact, are all the principle characteristics of Morshed Qasem Hemmati's performance . It seems that in his movements he innovates a new interpretation which is a combination of earlier postures of the traditional Pardekhans (curtain-storytellers) and his own mental personal conceptions of today. In general, contrary to some of the Pardekhans who concentrate on singing performance and this causes their performance to become internal- as Ta'ziya singers (sung-players) who sing Pardekhani- Morshed Hemmati tends to perform with objective outer adjectives. 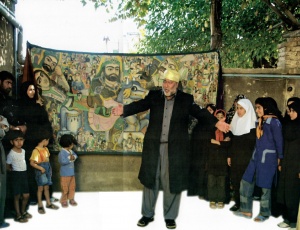 The Pardekhan transmits the story of the gathering of Jasem the Arab with a mixture of pitches of Shur mode and using melodies of Avaz e Abuata, Dashti, and Dahtestani tones. The accents of the phrases is on the first and second notes of the second notes of the second tetrachord and the ending are on the Shahed of Shur. This Pardekhani does not completely correspond to Radif music in terms of method of performance, poetic emphasis, melodic, movement and relation of intervals even though it resembles it, and sometimes in the singing of Pardekhani the intervals heard move outside the range of Dastgah (mode) music. However, in general the musical space is inspired by Shur Dastgah. 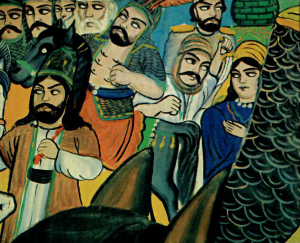 Jasim e Arab marries the girl just become Muslim, the new bride accepted marriage on condition that they visit Karbala and the girl is kidnapped by robbers and Jasim, not knowing what to do goes to Abbas's grave side to ask his aid. At the same time he enters the mausoleum of Abbas ibn Ali, the Iranian Nader Shah (The king) is there on pilgrimage, so the armies stop Jasim from entering until on the insistence of the young Arab the army takes pity and he enters ... the king promises him his wife back, but he asks for time. Jasim is worried about the fate of the new bride and asks the aid of Abbas. Abbas ibn Ali takes the bride back from the robbers and gives her back to Jasim.