Nabiollah Bahari (born in 1943) is a prominent Iranian Pardekhan whose style is characterized by austere theatrical movements. He was trained under supervision of Morshed Khan Ali (his father). 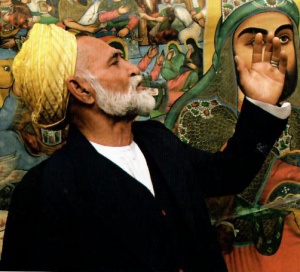 He uses a simple style in comparison with other curtain-storytellers, who use quick movements and variation in rhythm in their performance, with the aid of hands, head and neck and legs. In this mode, optimal use is made of energy and time to express the intention to the audience.

In the performance of Morshed Bahari, due to his simple theatrical movement, the singing plays a less important role, and for this reason, the non-melodic recitation and rhythmic narration is used more. At the beginning, of the melodic sections, the tone of voice of the singer narrator has an atmosphere of Mahur mode (Dastgah [1] ) with a hint of the Avaz - e Isfahan [2] [3] (in the second Dong) . Since then after the declamation of the Har ke darad havas e Karbobala (Whoever is longing for Karbala) section the melody refers to Shur Dastgah [4] (Avaz e Abuata) [5] and in the Magar nashnidi to hokm e sardar section because of the epic topic of the poem, the curtain-storyteller stays on one pitch for the first hemistich, and in this way he rightfully expresses the content of the poetry and in the second hemistich the melodies develop and in terms of the performed intervals it establishes an atmosphere of Homayun Dastgah (mode). The singing approaches the Segah Dastgah in Har ke darad havase Karbobala (Whoever is longing for Karbala) the song moves into Shur intervals which remind one of Abuata .The singing approaches the Segah Dastgah in Mara ma'zur dar az dastbusi... (using the third note of the first Dong up to the Shahed). However, the most important particularity of his method is the creation of rapid transitory spaces which evoke the intervals of some Radif music Dastgah without getting away from the declamation of words which from a kind of expression for introducing a specific stable pattern. [6] [7] 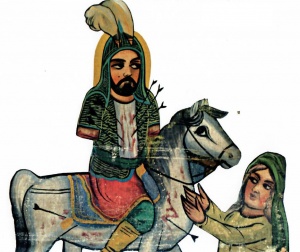 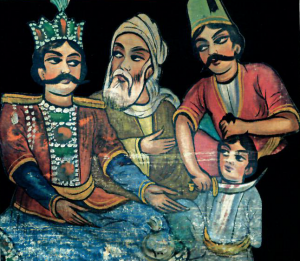 After performing the sections expressing the Holy name, advice, sermon, Morshed Bahari goes on to the explanation of the curtain and the story of the old lady pilgrim and Abbasid caliph, Mutawakkil. The cruel Caliph of Baghdad prevents the pilgrimage of the old woman to the shrine of Imam Hussain, third Imam of the Shi'ites who was martyred in Karbala. Mutawakkil orders that the old woman be thrown into the Tigris river. The woman's prayer to Imam Hussain causes Abbas ibn Ali to rush to her aid to complete her pilgrimage to her Imam.