Mirza Ali Shafai (born in 1948) is a distinguished Pardekhan, Ta’ziyakhan, Naqqal and Curtain painter. Mirza Ali has studied religious sciences and is aware of religious and historical events. He is dependent on expression and narration in performance through technical knowledge. So, a rich expressivity based on the texts and acquired understanding act as the main pillars of his performance. The presential aspects of his performance becomes clear during his singing in general and during Monajat, Goriz, [1] Nowha, Pandiyat, and Du’a. [2]

Perhaps the acquisitive aspects are related to religious duties and presential understanding arises out of the way of everyday activities and his life style. Therefore, his theatrical movements are separately inspired by two kinds of behavior in the field of presential and acquisitive understanding. In the presential part, motions are influenced by the ritual particularities and in the second part the usual rational characters common among most Pardekhans before activating their individual qualities can be seen. Perhaps the border between the ritual manner of curtain-storytelling performance, and other acquisitive methods can be found in these two subjects: following the ritual communal gathering of the Pardekhan and the people in comparison to Pardekhani as a profession, the knowledge of which belongs to the Pardekhan. Pardekhans who live in the village without following acquisitive studies, are mostly involved in ritual and Ommi (illiterated) behavior. Mirza Ali sings with a fusion of these two kinds of performance.

Mirza Ali Shafai follows ancient traditional styles in picture-storytelling. His performance is circular in meaning and in outer aspect is full of variation and variety. The remembrance of the name of God, the prayer, Monajat, the moments preceding the Event, and etc. is a sequence to which he refers, each part performed with his Own qualities. In ancient times Besmellah at first was sung with a sure tone and at the same time one which attracted attention because its being the beginning point could be the cause of dignity for songs and speeches up to the end of the storytelling. When Mirza Ali performs the different kinds of the poetry such as Qazal, Mathnawi, Bahr-e-tawil and Qasidah pays attention to their contents and their general forms. He also has this attention in the Nowhas, Muthibat-khani, and Shahadat-khani and Mirza Ali is one of the few Pardekhans who knows the time and reason of forgotten sections such as the call to prayer (adhan), various tangents, and advice. He depends less on personal particularities in the sung sections and is more performer of the old melodies. This is why one can see, the traces of curtain-storytelling traditions of the Turkish speakers to a great extent. On the correspondence of his songs with the music of Iranian Radif the following points can be mentioned: The beginning is in the atmosphere of Bayat e Tork and in continuation, it approaches to the Segah Dastgah (mode). The Pardekhani continues with a combination of spoken declamation and the notes of Segah Dastgah. In the end of the section the Pardekhan narrates in the Azari language in the atmosphere of Shur and this continues to be, dominant in the following rhythmic sections. 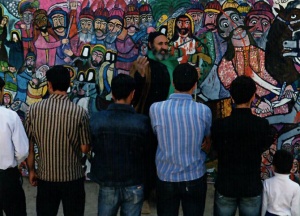 Morshed Mirza Ali performs with understanding and knowledge of the maqams, the degrees and orders of Curtain - storytelling and the hidden and apparent cycles of the curtain in the traditional way. In his performance of the curtain is necessary. Pardekhani is a circular and meaningful process which comes into being as a spiral feature. Its main and subsidiary circles are fused into special combinations by the narrators, and each Pardekhani shows the main circle taken from the symbolic and eternal interpretation of the five maqams (modes) in the dimension of the descending of the names and the plurality of the names which lead to the events of the story: - Remembrance of the Highest Name in its most original manifestation is Besmellaholrahamanolrahim (In the Name of God), which is the point of contact between the physical world with Being camouflaged within it. -First prayer is allegory and the extension of the Highest Name in relation to humans in general and present. Within all picture- storytelling performances in particular. In the first prayer the objective existence of the congregation is potential.

Mirza Ali lives in a village, is responsible for religious ceremonies, solving people's conflicts, curtain-storytelling, Maddahi (spiritual praising), Naqqali (epic narrative), Azan (call to prayer), and Ta'ziya-khani (sung playing) in his social and religious life. Mirza Ali knows curtain-storytelling to be his duty he tries to guide himself and others through it. These characteristics have become less pronounced among city-dwellers who with abstract spaces and new ways of life in the social lives of people with strong class contrasts, look at Pardekhani (curtain-storyteling) as a profession and a means of survival. In its ideal aspect, Pardekhani is symbol of traditional performances, which will be able to survive in this untrue form depending upon their protection by cultural institutions. With a comparison of the work and lives of curtain-narrators of the city and villages we can, to some extent, distinguish the difference between the past and present of Pardekhani traditions. The importance of surveying Mirza Ali's storytelling is in the fact that his main profession is farming and animal husbandry and so is not economically dependent on Pardekhani and in principle villages people do not look on ritual performances as a profession. Through this subject we can look at the origins of Ma'rekegiri (Juggler displaying) and street performances with this question: Are these a product of city life and cities, or are their origins in the ancient rituals and non-urban life?

The curtains of Mirza Ali Shafai are painted by himself. The curtain he uses at present in his performances is 13 meters long and 2 meters high. In it 33 gatherings and hundreds of portraits have been illustrated. The depicted gatherings are showing many details in various situations. The style and kind of paintings technically belong to the various situations. The style and kind of paintings technically belong to the past and dates back to Mohammad Modaber and Ghullar Aqasi. The faces just as the curtain paintings express general characteristics distinguishing the good from evil characters. The saints possess beautiful, dignified, dependable faces full of faith, and the evil ones are ugly, enraged, and devilish. Some of the images such as Mared ibn Sodeif who is cut in two is shown as a plurality to indicate other sinners who are all stained with one blow of the saints. There are many place changes of the gatherings with respect to other normal curtains because of the large size of the curtain. Mirza Ali's curtains are distinguished from others in the use of high contrast in color, excess use of contour lines, extreme attention to the facial expression instead of the style of the curtain design, variety in color spectrum and innovative techniques which are unusual with respect to other curtains. At the same time the curtain has marvelous connection with very modern painting which is surprising, perhaps it is the same link which the European modernists have long since discovered and used some of its elements in their works. 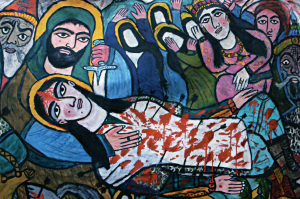 It is the martyrdom gathering of Ali Akbar son of Imam Hussain. The young Ali Akbar who is also the first martyr from the Prophet's family in Karbala goes to the battle of the enemies and conquers one after another.