Mirza Ali Khandan (born in 1933) is an Iranian Pardekhan from Kashmar, Iran.Since Morshed Mirza Ali Khandan was influenced by his father in his youth he has been proficient in Menbarkhani (religious narrative), Maddahi (encomium), Manaqibkhani (praise), Faza'elkhani (accomplishments), and Chavoshi (herald ship). Learning the other techniques in religious rituals and becoming proficient in heading other gatherings, led him becoming unique in performance of Pardekhani. In addition, Morshed Mirza Ali was trained in a village atmosphere and so he is simple in his performance, relying on basic movements. 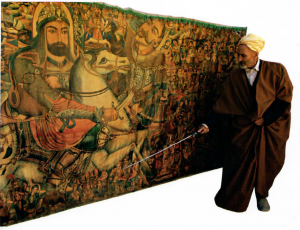 The important particularity of this performance method is the reliance on basic movements without the effective details found in city performance. Therefore, the storytelling of Morshed Khandan by relying on the exaggerated in relation to the main gestures, at times seem repetitive and exaggerated in relation to the fine movements of other performances. However, the repetitions along with the aid of the well thought out movements and gesture and gesticulations and meaningful facial expression all turns into a high technique in performance. Also, using the tabarzin (darvish axe) instead of a normal cane enhances these adjectives. After a time, the audience becomes deeply involved in the general performance which is aimed at in the content centered around an altruistic theme.

About the Parde (curtain)[edit | edit source]

The curtain used by Morshed Khandan, is illustrated by Ostad (acknowledged master) Hossein Hamedani, and dates back more than 50 years. The length of the curtain (parde) is about 4 meters, and is one of the largest of its kind. The Parde (curtain) has many faces and gatherings painted upon it. The darvish curtains are fixed in its generalities but may be varied in details. The most important aspects in common are:

- The division of the main spaces, such as: heaven on the top, earth, below, good characters placed higher than the evil ones and presence of the main characters in specific places.

- Depicting of the main gatherings and some subsidiary but necessary gatherings, such as: Karbala, prisoner caravan, battle of Abbas ibn Ali and Mared Ibn Sodeif, parents' curse, first night in the grave, Mutawakkil-e Abbasi, Tiflan-e Muslim, Blind Allahverdi and so on. Though it is possible that sometimes the faces change in position or size, but their presence on the curtain is certain.

- Use of ornamentation which on the new urban curtains is heavier, and on the older more original ones, is less.

-A rectangular frame of small or very large size.

- Colored space with symbolic meaning such as green for the Prophet's family and red for the antagonists.

- Emphasis on the graceful adjectives of the protagonists and the evil aspects of the antagonists in the painting of the faces, such as an innocent look, invoking a feeling of trust and faith, permanence and established position in placing faces with a feeling of sacredness, and antagonists painted expressing feelings of anger and varying in position and sometimes being very ugly.

The story is about the narration of the Parents' Curse. The main meaning of these gatherings is directed towards unruly children. The Curse causes the guilty children to feel guilty on the first night of the grave. In this story, one day one of the followers of Mohammad the Prophet was passing through a cemetery and sees a flame coming out of a grave. He went to the Prophet and told him about this event. The prophet, Ali, Zahra, Hasan and Hussain go to intercede a healing at the graveyard. They bring the elder woman and ask her to forgive her son.