Masjid al-Nuqta (Arabic: مسجد النُقطة) located on Mount Jawshan in Aleppo, Syria is among places where Shi’a visit. It is related that the caravan of captives stopped near Aleppo in their way to Yazid’s court. Then. one drop of blood fell from the sacred head of Imam Hussain above which a mausoleum called Mashhad an-Nuqta [mausoleum of the drop] was erected.[1] 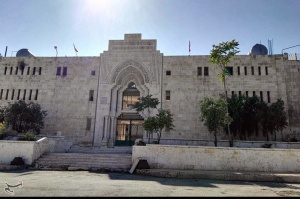 After the martyrdom of Imam Hussain, the caravan of captives was taken through many cities from Kufa to Damascus. It is said that near mount Jawshan and the monastery of "Marat Marutha”, the caravan stopped for rest. They placed the head of Imam Hussain on a rock and a drop of blood fell from it on the rock. Every year, that drop would boil on Ashura, and people would assemble there around it and hold mourning commemorations in honour of al-Hussain. A great deal of wailing would be around it. This continued to take place till Abdul-Malik ibn Marwan ascended the throne in 65 A.H./684 A.D. He ordered that rock to be removed. It was never seen after that, but the spot where that rock stood became the site of a dome built in its honour which they called "an-Nuqta" (the drop).[2]

It is said that Sayf al-Dawla al-Hamdani, a Shi’ite figure, was the first person who built a chamber and a mosque over the rock and the monastery in 350/961 and called it Masjid al-Nuqta.