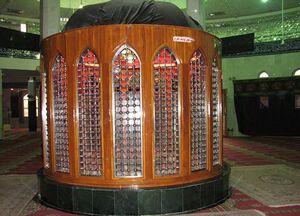 Maqam Ra’s al-Hussain (Arabic: مقام رأسُ الحُسَین) refers to various sites that have been claimed to house Imam Hussain’s head. Although there is consensus that the body of Imam Hussain is buried in Karbala, the burial of the head is open to debate. However, according to majority of Shi’a sources, Imam Hussain’s head was eventually returned from Damascus and attached to his torso in Karbala and buried there.

There are various accounts about where Imam Hussain’s head was buried; among others: Aleppo, Ashkelon, Baalbek, Cairo, Damascus, Homs, Merv, and Medina.