Hassan Mirza Ali (born in 1946) is a prominent Pardekhan and Ta’ziyakhan. Morshed Mirza Ali is quick and agile in movements, his speech causes quickness in motion and leads to the appearance of epic performance. Years of reciting sung-plays (Ta'ziya) has increased his ability in curtain-storytelling and his performance is influenced by this genre of sung-playing. The connection with the audience, control and self-confidence, powers of improvisation in the needed correspondences relating to contemporary subjects, and faith in the truth of the told stories are his other particularities. 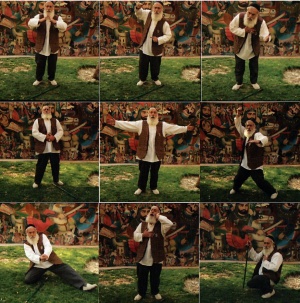 Hassan Mirza Ali has reached the status of Morshed (acknowledged master) [1] in Curtain-Storytelling [2] speech and motion. His performance has the following characteristics:

- Having a thorough knowledge of stories based on the illustrated curtains

- Having of the linguistic terms in the sections of the prologue, Monajat (rogation), Khutba (sermon), Manaqib (Praise), lamentation, tangent, story and prayer) [3]

- Having of the traditional and known (figures, fixed and mobile) of picture- storytelling.

-Having of the historical, political and ethical particularities of the characters in the curtains (protagonists and antagonists)

- Performance of various roles following the rules of patterns (figure and intonation) and changing of roles.

Morshed Mirza Ali due to his familiarity with a great many sung play (Ta'ziya) melodies is very successful in curtain-storytelling. For example, in this song series, he begins with the intervals of the prelude (Daramad [4] / Pishdong) [5] of Mahuro. [6] This happens while the melody modulation is not corresponded with what we know as the Mahur acoustic space. 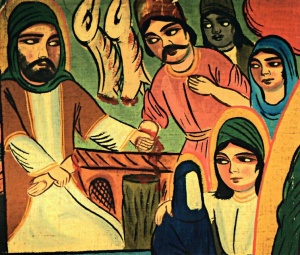 Nezameddin Qasab with his wife and children are followers of Imam Ali and each time, they bring the name of Ali to their lips the oppressive government bothers them. The ruler becomes seriously ill and his physicians deem the blood of the faithful Shi'ite Ali to be the one and only cure. In the meanwhile, Imam Ali is guest of Nezameddin, the son of Nezameddin martyrs himself so his father could host his guests. The son with head cut off is miraculously brought back to life by Imam Ali.