Ezatollah Farrokhi (born in 1958) is Pardekhan, Maddah, and Ta’ziyakhan who started his career when he was 18 years old. He had several mentors including Morshed Mohammad Ahadi and Haj Taghi Mirza Ali.

Morshed Farrokhi adopts Ta'ziyekhan (sung-player) motions in his picture-storytelling performance. Before performing Pardekhani he worked in Ta'ziya groups for years which perform another type of religious theatre of Iran. In Ta'ziya, movements are composed of allegorical interpretations and actions become symbolic. Capabilities, skills and talent of the Shabihkhans (sung-players) are objectified within a specific Ta'ziya structure and in each new type of creation there is limitation and even prohibition. In Ta'ziya, people sit around the performance and the Shabihkhans are the virtual figures of the saints and the evil personages; but in Pardekhani (curtain-narrating), a part of the surroundings of the audience belongs to the position of the curtain, so the figures are a continuation of the people and the Pardekhan singer does not resemble the saints or evil characters but is only narrator of their actions . In Pardeh-khani (curtain-storytelling), it is usual to maintain the distance between Shabih and Shamayel which are denoted to the painted faces of the curtain, and in this case the narrator seems extremely sensitive and subtle. The Ta'ziyekhans who go on to Pardekhani at times minimize this distance, and these days this style has become known as one of the styles of Pardekhani. Morshed Farrokhi belongs to this group of Pardekhans. 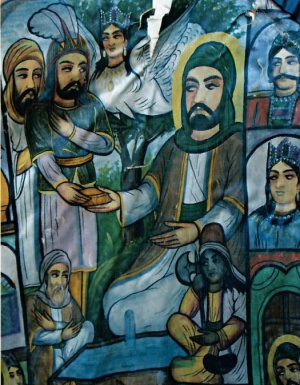 The gathering of Hurr Ibn Riahi who is one of the leaders of the army of Yazid, is narrated. Hurr, on reviewing inwardly and with attention to the sacred lineage of Imam Hussain who belongs to the Prophet's dynasty, leaves the army of Yazid and joins the army of Imam Hussain. Hurr is martyred at the Battle of Karbala. Because of Hurr's inner conflict, this gathering is much developed with many ups and downs. The story of Hurr is an inner struggle between the refutation of this worldly interests and the preference towards spiritual transcendence of the eternal world.