Esmail is skilled in performing other religious ceremonies as well as Pardekhani (curtain-storytelling). Therefore, the singing techniques of Rawza-Khani (religious recitative), Ta’ziya (sung-playing) and Chavoshi-khani (recite the songs of carvans or wars) are used in his Pardekhani performance. In Pardekhani, Madh (eulogy) and Manaqib, (praise), Mosiba and Marthiya (lamentation), Sokhanvari (eloquence poetic gift) and other melodies make his Pardekhani a ceremonial vaster than just storytelling , and it can be considered as a unique method . Nosuhi, using periods made of three or sometimes four pitches in performing the rhythmic sections of Pardekhani, gradually raises his voice to the higher pitches and changes the range of pitches he uses to higher ones. In this way different atmospheres are heard which at times resemble that of Iranian musical modes (Mahur, Segah, Chahargah) or at other times not. The Pardekhan (curtain-teller) does not feel obliged to adhere to maintain the tonalities he began with, but uses a few pitches rhythmically which have a similar theme only being higher or lower in tonality. 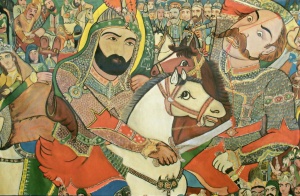 Darvish Esmail Nosuhi narrates the battle of Abbas ibn Ali and Mared ibn Sodeif in Karbala. Mared's father is killed in the Siffin Battle by Imam Ali and he swears to revenge his father through Ali's son , Abbas ibn Ali. Darvish Esmail narrates the face to face of them, after describing Mared's dawning his armor and Abbas' preparation for attack. Mared is killed by Abbas in this battle.