Ali Akbar Javanbakht (born in 1942) is a prominent Pardekhan who began Pardekhani at the age of fifteen. The Pardekhani and Rawza-Khani (narrative about martyred imams) of Morshed Javanbakht is inherited. This is why he has learned from his father and other Morsheds having styles in all the details of curtain-storytelling including the narration of all the gatherings and knowledge of all the faces, the melodies and the theatrical movements.

The composition of theatrical actions includes the putting up the curtain, the introduction and the beginning poem with Holy reference, techniques using body, facial expression and narration, for prayer, anger, blows of the sword, shooting the arrow, holding up the shield and final prayer. The most prominent characteristic of his theatrical motions in storytelling is his lack of exaggeration. With the least indication of the body he conveys meanings. In this way the Pardekhans use methods of the larger cities which use a bigger variety of parts. 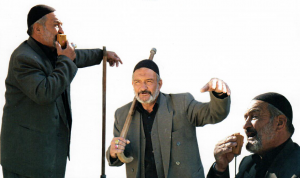 Pardekhani generally is performed in a square where people are present. The curtain is attached to a wall using a few nails or to two pillars or trees and the singer stands next to it. However each Pardekhan knows the choice of time and place influences the number of audience. The best places are at intersections, near small squares, and near sacred places and Imamzadehs (shrines). Morshed Javanbakht set up his curtain in an open space of Mashhad Migan in the present performance. At the same time there was Ta'ziya (sung plays) being performed in the shrine commemorating the martyrdom of Ali. The time of performance is just as the place very influential in the overall situation of the performance. The singer must not perform during prayer or call to prayer (Azan) or during the rush hours, these events are not in accordance with Pardekhani or Ma'rekegiri (Juggler playing).

The Snake of Qashiye gathering is the description of the scene of hell. It shows how sinners are punished. The snake of Qashiye is the one with a big wide mouth which swallows the sinners. The illustration of it doing this to many of the dwellers of hell is usually painted on the left at the bottom of the curtain. The second scene is the Curse of the Parents. The Parent's Curse conveys the concept of children not being grateful and the curse of parents. When a child is ungrateful for having a mother, the grave of the child burns in fire. She or he with interference of the saints is saved and the mother lifts her curse. The name of Imam Hussain mediates the saving of the child. The singer narrator in the third gathering narrates the story of Hende, the wife of Yazid, who was raised in Imam Ali's house and became Yazid's wife through his trickery. Hende even though living in the house of the enemy of Imam Ali, still loves this family. After the Karbala event, the caravan of prisoners stops by a ruins near Yazid's castle, among them is Zaynab, sister of Imam Hussain. Hende goes to them after viewing the crying and weeping of the young children, compassionate and wailing for righteousness. The image of Hende is one of the eight images of the heavenly ones illustrated on the left side and upper part of the curtain. This set of faces belongs to the believers all of whom have reached faith through their relation with the saints. The images of the other gatherings are the Armenian Doctor, Salman al-Farsi, Hurr, Habib ibn Mazaher, Hende Imam Ali's Kaniz(maid), Yazid's wife and the Christian girl.