Morshed Akbar Dabbaghiyan Isfahani (born in 1946) is a distinguished Naqqal and Pardekhan who started his career at the age of five. Morshed Dabaghiyan's performance method of Pardekhani is very innovative and is different from the older one. In his method each gesture is broken into smaller gestures. For example, his performance of shooting an arrow is not limited to the moment of showing the gesture of shooting the arrow, rather it shows taking the arrow out of the case and placing it in the bow and then shooting it.

The diversity of transforming a word or phrase into signs is another thing of his accomplishments. From the earlier times the most important postures were the signs of the crown, the veiling, posture of listening, prayer, drinking and eating, indicating a far or near location, donning armor and helmet, clapping, bludgeoning, blows of the sword and dagger and movements with the cane. Morshed Dabaghiyan adds dozens of gestures to the usual ones, according to the different narrations, this amount would be either decreased or increase.

Imam Hussain gathers all his followers and notifies them of their martyrdom on the day of battle. The young Qasim, son of Imam Hasan, asks his uncle whether he would be martyred or not? Imam Hussain predicates that he also would be martyred. Ibn Sa'd wants to send the Syrian Azraq, the famous hero, to fight the youth Qasim. Azraq at first underestimates the opponent and thinks it is under him to fight this opponent, however, at last Qasem kills him. But before this Azraq sends his son to fight Qasim and each time Qasim throws the severed head in front of Azraq. At last, Qasem who is surrounded by the enemy, is martyred. 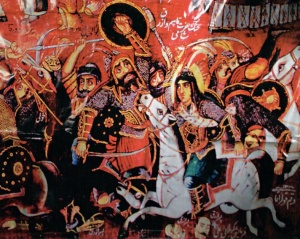