Darvish Suleiman Heidari (born in 1941) is a prominent Pardekhan who started his career at the age of fourteen. Living among Turkish Iranians who bear various traditional Ashiq music, performances and dance has caused his picture-storytelling to be under the influence of this art. 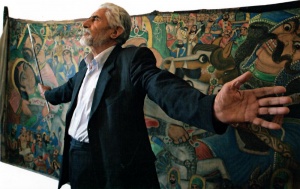 The character of his performance is a general translation of Ashiqi behaviors. Use of foot poses for changing position and standing in a same place, use of parallel or complementary positions with the hands and his facial emotions, and turning the head and neck, all are some of the theatrical movements of Darvish Suleiman. The difference between the performance method of Darvish Suleiman and the other Pardekhans is the tendency towards relatively rhythmic and lyrical movements maintaining epic quality.

Darvish Suleiman begins the Pardekhani with mention of the holy name Besmellaherahmanrahim [1] and then uses the spoken word for the encomium saints and then in Azari language invites the audience to repeat the Salawat (salute to the saints). In continuation, he sings in the Pishdong of Homayun Dastgah (mode) intervals ke ruze qiamat shavad ashekar... resting on the Shahed of Homayun. He describes the curtain in the Azari language in a spoken fashion, and in this same relation recites poems in Farsi and so introduces the main characters of the curtain in this way. He uses the intervals of Chahargah mode to chant the Shartim ghabule...Abu Taleb e an zaman... section choosing a range of about two tetrachords (the second dong up to the third note of the third dong). In this section the accents of the Pardekhan is on the third note of the second dong (sixth note of Chahargah) and its cadence is on the first note of the second dong (the fourth note of Chahargah). Then again with a spoken voice, and in the middle in the section of Javani... on a tangent he comes near the musical intervals of Abuata, and then continues again in his previous voice. In the hemistich of Chon verdi gulakh nale teflan e Abolfazl... again he moves on to the intervals of the Chahargah mode (the second and third tetrachords with the same Shahed and pause) and in the second hemistich he returns back to the spoken word. The singer narrator at times uses the kind of notes that are not corresponded to Dastgah music and only can be said to be like a harmonic riff which quickly changes to spoken words such as Sasladi ... Ali ... Ali and also at times takes on the pitches of Azari musical maqams such as does religious and funeral music (Nowha-khani). A combination of narrative and rhetorical voice and use of techniques of a kind of music called Ashiqi or Deishme; specially, in the spoken sections and the Ashiqi singing method is what makes up the performance of this curtain-storyteller. The dominance of religious feeling finally creates a kind of contilation which is specific to the Turkish region: strong sonority, varied dynamic, preciseness in the performance of the intervals, well thought out pauses and spoken sections and singing and use of Turkish language phonetics create his particularities.

In the Darvish curtains four of the faces are painted larger than the others: Imam Hussain, Ali Akbar and Abbas on the right side of the curtain and in the line of saints and Mared ibn Sodeif on the left side and in the line of the evil characters. The figures of Abbas and Mared are located in the middle of the curtain. Abbas cuts Mared into two from the middle of the head down with one blow of the sword. The line of red blood is drawn from his face to his stomach which is the continuation of the sword's cut in movement. In contrast, Abbas is riding on his white horse calmly and with certainly however deep in thought. On the right side of Imam Hussain lying Ali Akbar with head on his knee and his body is full of arrows. Ali Akbar the martyr's eyes are open ... we do not rightly know whether this is the temporary or eternal world. The face of Imam Hussain resembles that of Abbas as if the curtain's painters intended a spiritual and similar content to be in the faces of the saints. All three of the saints on the right side have a Hashemi mole, an aura around their heads and green headband which again emphasizes their unique and spiritual essence. 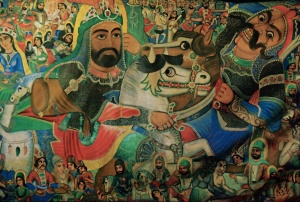 Besmellaholrahmanolrahim, the introduction of the curtain, is the background for the entrance of the heroes into the main story, the side stories and finally the main story make up the Pardekhani performance. The main part of the narration is allocated to the characteristics of Ali and is a sign of the saint's influence on the Turkish-speaking Pardekhan singers. The main story is narrated after the encomium. Abbas at age 14 is victorious over Ibn Shahrzad, and his nine sons. These are army Muawiya’s heroes ... After that the scene of Abbas' battle with Mared ibn Sodeif begins. Mared is cut in two by the sword of Abbas which is a symbolic image of the saint's war strength.