From Wikihussain
(Redirected from Muawiya)
Jump to navigation Jump to search 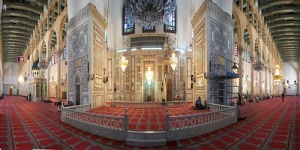 After 'Ali was assassinated by a Kharijite dissident in 661, he was succeeded by his son [Hasan] for a short while. After gaining support of Syrians, Mu'awiya went to Iraq to confront Imam Hasan. Doubted in the loyalty of his companion, Imam accepted the peace with Mu'awiya provided that the caliphate of Muslims after Mu'awiya would be for Imam al-Hasan. Thereby, Mu'awiya inaugurated Umayyad rule in 661 and the seat of the caliphate was transferred to Damascus.

Although Shi'as have not approved of Mu'awiya's character throughout history, some of his personality features have been appreciated by Sunni Muslims.