Hussainiya-ye Moshir, a Hussainiya(q.v.) building located near the Baharband-e Moshir in the Sang-e Siah quarter of Shiraz, which is famous in particular for its exquisite tile paintings. It was built as an act of piety by Haji Mirza Abu’l-Hasan Khan Moshir-al-Molk-e Thani (1226-1307/1811 or 1812-89), a wealthy Qajar dignitary, who served as the vizier of Fars for thirty years. He financed the building of a number of religious institutions in Shiraz, including, in addition to this hussainiya(1290-93/1873-76), a magnificent mosque (1264-74/1848-57) named after him. [1] The hussainiya building was originally attached to Moshir-al-Molk-e Thani’s house and garden, but they have not survived. His sole heir, his daughter Soltan Hajia, had his hussainiya transformed into a school (dabirestan) in 1306 Sh./1927.[2] 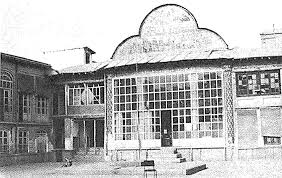 Hussainiya-ye Moshir, which boasts some of the finest examples of Qajar tile paintings (kashi-kari), stonework (hajjari), and building with stone, eventually attracted the attention of the Fine Arts Department and became listed as a national monument in 1972, after which it underwent restoration. Passion plays were performed there during the international symposium on taʿziya held at Shiraz in August 1976.[3] The most famous painting in the Ḥosayniya-ye Moshir is the panel of kashi-kari on the pediment built on the north side, above the shah-neshin (seat of honor) overlooking the courtyard where taʿziyas and other related rituals were performed. This masterpiece by the artist Aqa Mirza Bozorg represents scenes from the drama at Karbala on eight cartouches in two registers. These latter are separated by a frieze, containing a poem about Imam Hussain and Karbala in fine nastaʿliq calligraphy by Wesal-e Shirazi (1193-1262/1779-1846). The centerpiece of the upper register depicts the Day of Judgement. Color photographs of this panel, together with other paintings, architectural details, and inscriptions at the Hussainiya-ye Moshir have been reproduced by Homayuni.[4] The tile paintings compare favorably in quality with those found in the Imamzade Shah Zayd at Isfahan [5] as well as those in the Takia Moʿawen-al-Molk in Kermanshah (see Peterson).