From Wikihussain
(Redirected from Fatimah)
Jump to navigation Jump to search 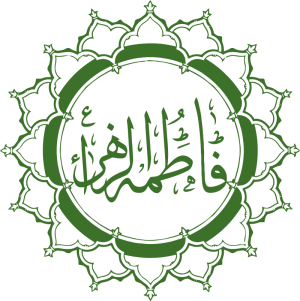 Fatima, (d. 11 AH/632 AD), daughter of Muhammad and Khadija, wife of ʿAli b. Abi Talib, mother of al-Hasan and al-Hussain, was the only one of the Prophet’s daughters to enjoy great renown. She became the object of great veneration by all Muslims. This may be because she lived closest to her father, lived longest, and gave him numerous descendants, who spread throughout the Muslim world. [1] She is also one of the People of Cloak and, in Twelver Shi’ite belief, one of the fourteen Infallibles. She was the only lady chosen by the Prophet Muhammad to be part of Mubahala with the Christian of Najran. In contrast to the rich hagiographic material on Fatima, purely historical information, reported particularly in Sunni sources, is rare and usually involves only insignificant episodes. 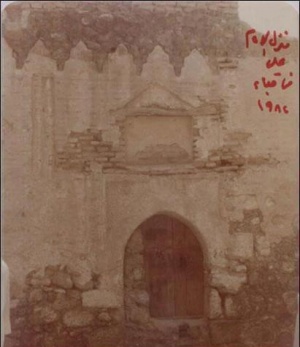 A rarely seen picture of Fatima's house in Medina,1982

Fatima was probably the youngest daughter of Muhammad and his first wife, Khadija, the only daughter to live long enough to bear numerous offspring. Her date of birth is variously given as between five years before and two years after the beginning of the Prophet’s mission. [2] She was particularly close to her father and is said to have followed him to Medina shortly after his emigration (hejra). Although there is disagreement over details, she became the wife of the Imam Ali b. Abi Taleb probably in 2/623-24. Muhammad arranged this marriage in obedience to divine will, having already rejected requests for her hand by Abu Bakr, ʿOmar, and probably the very wealthy ʿAbd-al-Rahman b. ʿAwf. [3]

Before the occupation of the prosperous oasis of Khaybar ʿAli and Fatima were poor. As long as she lived Fatima was ʿAli’s only wife and bore him five children: Hasan, Hussain, Muhassen (or Muhsen, dead at very young age), Omm Kulthum, and Zaynab.

She seems to have performed only three acts of political significance, each recorded in almost all sources, both Sunni and Shiʿite, though in different versions. First, after the conquest of Mecca she refused her protection to Abu Sufyan;

The Incident of Saqifa[edit | edit source]

Second, after the death of the Prophet she courageously defended ʿAli’s cause, fiercely opposed the election of Abu Bakr, and had disputes with him and particularly with ʿOmar.

The Usurpation of Fadak[edit | edit source]

Third, she laid claim to the property rights of her father and challenged Abu Bakr’s categorical refusal to cede them, particularly Fadak and a share in the produce of Khaybar.

Hagiographical material on Fatima is much more ample. Whereas Sunni authors emphasized her perfectly “orthodox” virtues, in particular her rank as the daughter of the Prophet, her ascetic life, and her exemplary piety, [4] Twelver Shiʿite hagiographers depicted her as a figure of cosmic significance, though early reports, as well as traditions attributed to her, are much scantier than those related to the other thirteen immaculate ones (maʿsum). Fatima was counted among the Prophet’s house (ahl al-bayt), the five people of the mantle (ahl al-kisa), and the people of the ordeal (mubahala) and thus occupies a central place in the pleroma of the immaculate ones, enjoying ontological, initiatory, and eschatological privileges of the same order as those attributed to the Prophet and the imams.

Her name, like those of all the people of the mantle, was derived from a divine name. [5] She was present in the light of the fourteen impeccable ones when it was placed in Adam’s loins (solb). It was because of this light that angels were ordered to prostrate themselves before him. [6] Among the names God taught to Adam [7] were those of the people of the mantle, including that of Fatima. [8] 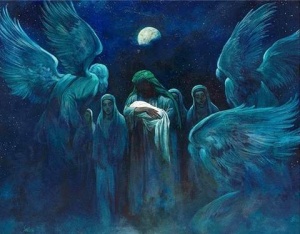 The Reason of Creation by Iranian artist, Hassan Rouholamin. It points out to Prophet Muhammad's hadith about Fatima’s birth.

Her conception and birth were miraculous. Her origin was in a fruit from paradise, often identified as an apple or a date, that Muhammad had eaten during one of his ascensions and that had become “the water of his loins”. [9] According to one tradition, this fruit had previously been touched by the sweat and a plume from the wing of the angel Gabriel. [10] It was for this reason that the Prophet always said that Fatima was a celestial being in human form (huraʾ ensiya), that she emitted the perfume of paradise, and that she had a name in heaven (usually Mansura). Fatima spoke with her mother while still in the womb. All the most pious women recognized from pre-Islamic religions were present at her birth, namely, Sarah, Asia, Sephora (Safuraʾ), and especially Mary the mother of Jesus. [11] These names are often linked with that of Fatima, and parallels with Mary are particularly frequent, parallels emphasized by Massignon in all his works on Fatima. [12] Yet Fatima’s superiority to other women is always underscored. She is given the epithet “the Great Lady/the Best of Free Women”. [13] At her birth Fatima pronounced sacred formulas and announced future events; the world was bathed in light. [14] 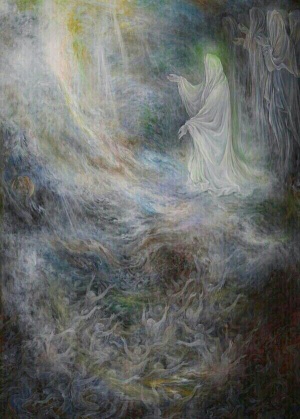 Fatima by Iranian master of painting and miniatures, Mahmoud Farshchian

In fact, light and Fatima are always linked: at the anthropogonic stage already mentioned, in Shiʿite commentaries on the Light verse, and at her birth and later in her life, especially when she prayed and meditated. She is said to have been “the source of the light on the horizon,” and it is for that reason that she is called “the Confluence of the Two Lights”, [15] and that her most famous epithet was al-Zahra. [16] Ibn Shahrashub [17] listed more than seventy honorary names for Fatima, among which the most common are Maryam Kobra (the supreme Mary), Batul, [18] and the mysterious Omm Abiha (Mother of her father), which has been variously interpreted.

In addition to light, the life of Fatima was characterized by piety; sadness over the destinies of her relatives and children; courage; obedience to God, her father, and her husband; and initiatory knowledge. [19] She is the guardian of two of the secret and sacred books of the immaculate ones, Ketab Fatima and Moshaf Fatima, which may in fact be only a single book, and two secret tablets, of white pearl and emerald respectively. [20] Miracles resulting from her superior nature, piety, and esoteric knowledge are frequently attributed to her. [21]

According to early Imami writings, the name Fatima is explicitly mentioned in the “integral” Quran, [22] and early Imami exegetes, finding allusions to Fatima in a number of surahs (chapters), sometimes resorted to rather daring interpretations, for example, identification of the “night of the decree” (laylat al-qadr) or the “holy spirit” (al-ruh al-qods) with the daughter of the Prophet. [23] These interpretations differ little in nature from those of “extremist” (Gholat), some of whom identify her with the cavern of the Seven Sleepers or with the rock of Moses from which water gushes forth.[24] . 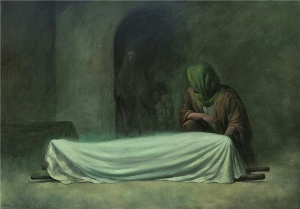 The House of Grief by Hassan Rouholamin. He depicts Ali ibn Abi Talib and his children farewell to Fatima.

The first substantial biography of Fatima, by Henri Lammens (1912), was mainly based on historical and Sunnite sources. Lammens’ rather antipathetic portrait of her was severely criticized by Louis Massignon, [25] who preferred to portray her both as an incarnation of divine vengeance [26] and especially as a compassionate mother akin to the Virgin Mary. [27] Henri Corbin took up Massignon’s study of Fatima, but with particular stress on redemption; unlike Massignon’s “transhistorical” approach, his method was rooted in gnostic theosophy. While accepting the main parallels between Fatima and Mary, he focused on her role as eternal feminine archetype, Fatima as Sophia, a manifestation of God and the feminine element of the Prophet and the Imams, whose own theophanic and initiatory functions depended on their degree of fatemiya. [28] Massignon’s original exposition of similarities between devotion to Mary and to Fatima, sometimes called Maryam Kobra, has been criticized, however; [29] the similarities remain partly conjectural, especially those involving the Marian cult at Fatima, Portugal. [30]

Corbin also drew parallels between Fatima and pre-Islamic Persian feminine archetypes embodied in Arədvi Sura Anahita. This connection was further stressed by Wilhelm Eilers in his study of Shiʿite holy water, heavenly and earthly waters having been part of Fatima’s dowry (mahr/mahriya), as was salt. [31] In popular belief Fatima has been linked with archetypes and natural elements connected to fertility rites: khezr/Elias, the rainbow, the jasmine flower, and the pomegranate. [32] She is also said to symbolize the cavern of the seven sleepers of Ephesus and the Masjed al-Aqsa, the goal of Muhammad’s night journey.

Esoteric or popular beliefs about Fatima, often connected with episodes in her hagiography, constitute the basis of several feasts and pilgrimages (ziara). The most important of the former are commemorations of the ordeal (mubahala) witnessed by the ahl al-ʿabaʾ, who are thus recognized as legitimate leaders of the community, celebrated on 21 Dhu’l-hejja; [33] Then there is Fatima’s birth (mawludiya) on 21 Ramadan, with a secondary celebration on 15 Shaʿban (which also commemorates the birth of the Mahdi Fatemi; the laylat al-baraʿa; the death of Salman); then her death on 3 Jomada II, with a secondary celebration on 2 Ramadan; of her figure as al-Masjed al-Aqsa, on 27 Rajab, commemorating Muhammad’s meʿraj. [34] Specific ziarat are made for Fatima at Medina. [35] In private rawza-khani (recitation of the martyrdom of Hussain) assemblies held by Persian women at any time of year, the most popular story is of Fatima’s invitation to a wedding, where she converts those present. [36] Special offerings are dedicated to Fatima: small pots (digcha-ye hazrat-e Zahra) on the last Wednesday of Safar and samanu, a kind of pudding reputed to have been her favorite dish. [37] On the last Wednesday of the solar year chaharshanba suri some families used to break and replace their earthenware pots in her honor. [38] Offerings and thanks are dedicated to Fatima as an intercessor on various occasions and in various sanctuaries throughout the Islamic world. She is especially invoked by Shiʿite women during childbirth. [39]

Popular devotion finds its utmost expression in representations of redemptive suffering focused on the Karbala paradigm. As mistress of the bayt al-ahzan (house of sorrows) and the Day of Judgment, [40] Fatima is present in most rituals as an “icon”: She wears a crown for Muhammad, a necklace or sword for ʿAli, and earrings of diamonds and rubies for Hasan and Hussain. [41] Hussain’s daughter Fatima Kobra, who allegedly married her cousin Qasim b. Hasan at Karbala, and the sickly Fatima Soghra, who remained in Medina, were both named after her. [42] Banners (ʿAlam) related to Fatima are carried in Muharram processions. The 17th-century traveler Adam Olearius mentioned having seen at Ardabil a miraculous ʿalam allegedly made by her daughter. [43] The large Bibi ka ʿalam, made of gold (with pendant diamonds on each side symbolizing earrings), is carried on an elephant in Ashura processions at Hyderabad, Deccan, and is venerated by both Sunnites and Shiʿites. [44] The symbol of the open hand of Fatima (cf. the hand of God among Jews, of Mary among Christians) is widespread in Sunnite areas, [45] but among Shiʿites the open hand (panja) represents that of Hazrat-e ʿAbbas b. ʿAli (q.v.), severed at Karbala. [46] Rawza-khanis and other liturgies and rituals connected with Fatima also found their way into passion plays (taʿzia; see bibliography).

Beside Fatima’s name and variants, popular for Muslim girls, her epithets Zahra, Tahera, Zakiya, Raziya, Razia, Batul (virgin), Kaniz (maiden), and the like are also given as names, as are various diminutives: Fatayma/Fotaytom/Fattush, Foti/Foto in India. [47] Her name is sometimes given to girls born on Friday night. [48] Fatima as “sovereign of feminine humanity” [49] has been variously appreciated in recent history. Fatima has been idealized as a symbol of feminine excellence, a model of submission both to the will of God and her husband [50] and authenticity and liberation for all women (Shariʿati).