Darvish Ali Maddahi (born in 1959) is a prominent Pardekhan, Maddah, and Naqqal who started Pardekhani when he was seven years old. Darvish Ali is an acknowledged master in performance of Pardekhani activities and movement and in the performance of postures based on the words and is one of the rare examples in Pardekhani of the Turkish region. In the performance of his body movements a flowing and forceful dynamics is seen, his body members, specially the hands and head and neck have balance and rhythm either while he moves in front of the curtain or when he is motionless.

His motions follow the known patterns of Pardekhani (picture-storytelling). In this method, the totality of movements occurs at the service of the spoken narration and the sung poetry which are based on the meaning and the contexts of the curtain. In the rational analysis, this method arises out of specific agreements, but in the Gnostic interpretation the unity in the curtain-storyteller's actions reach towards the unity in meaning of spoken word and song which are matters of the language. These figures are specific and known gestures and their only distinguishing mark among the various Pardekhans is the skillfully performance corresponding to the content of what is said and sung. Therefore, the originality of the Pardekhani motions arises out of the truth of language and its objectification in words.

Darvish Ali follows the sequence of singing and spoken word in curtain-storytelling. His singing has two sources of inspiration, 1- Religious music in the form of Nowhe (mournful songs), Rawza (religious lamentation), Muthibat (passion), Shahadat (martyrdom) and Khutba-khani (sermon), which have some differences with sections of Pardekhani 2- Music based on the poetry and language of Turkish region. In the first section, the singers of religious music who are not Pardekhans are more dependent on limited forms with strictly lamentational characteristics and content in their style. If anyone of them turns into picture-storytelling, his intonation and singing feed with limitation in the non-lamented sections. Darvish Ali is a skillful master of the music related to Pardekhani, even with his constant presence among the encomiasts or Maddahs. Darvish Ali is confident in using enough knowledge and technique in performing the different sections of Pardekhani, such as the remembrance of the name of God, the prayer, Monajat, moment preceding he event, Muthibat, Nowhe, the Qazal and etc. After a part with the spoken word in the Azari Language the music begins again and the pardekhan sings a melody which can be compared with reservations to the Avaz-e Isfahan. This part is made up of a few rhythmic sentences with a common theme. Again, the intonation of curtain-narrator takes the form of declamation and then, the Shur Notes can be heard in a mode similar to the Gushe Dobeyti. The last sentences of Pardekhani refer back to the same intervals. The To'e gathering is performed with the spoken word and only a short sentence in Shur intervals and an atmosphere of Abuata can be head. Yusef the grocer's gathering like the To'e gathering beings with spoken words and then the Pardekhan sings a Nowhe (lamentation) in Shur Dastgah (mode). This Nowhe is made up of four sentences and has one beat and is emphatic. The Nowhekhan performs with his own inner feeling and at times might miss a beat or add one. This is a particularity of Nowhe which is done consciously by the Nowhe singers and this technique increases the influence of the lamentation. The mentioned melody is performed and continued to the end of the section. These sentences have no defined tempo, and do not retain qualities of a Nowhe. 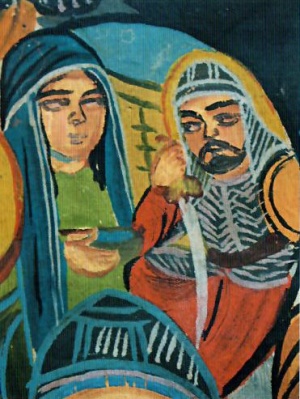 Darvish Maddahi introduces the gatherings of the curtain first, and continues to narrate. the story of Mared ibn Sodeif, a famous strongman who is killed by Abbas ibn Ali. The second gathering is the story of To'e gathering, To'e is a pious old woman from Hejaz who lives in Kufa. She is the only person that hides Muslim Ibn Aqil, representative and first soldier of Imam Hussain. The people of Kufa by sending written messages and people know themselves to be his followers, on the verge of his entry to Kufa, they break their path of solidarity and Muslim is thrown down from Darolkhalafe during this upheaval to be martyred. Another gathering is that of Yusef e Baqqal. Yusef divorces his wife because of disagreement with her brothers. She who is pregnant is treated disgracefully and Abbas goes to her aid and gives testimony of her child's being lawfully born.