Seyyed Hossein Mirian (born in 1931) is a distinguished Pardekhan from Isfahan, Iran. He began Pardekhani when he was 20 years old. His style of Parekhani is remarked by several innovations both in terms of performance and reciting methods.

Darvish Hossein moves from one posture to another taking his time. In each new posture he is able to express symbolic cognitive concepts with his body movements. His main movements occur when it is necessary to indicate the faces and locations being narrated on the illustrated curtain, just contrary to traditional Pardekhan movements who continuously move back and forth along the curtain. In Darvish Hossein's method which includes miniature and delicate movements and postures, attention to actions and transmitting concepts becomes more pronounced than in the past. Movements of his head and neck while his body is motionless are effective and full of meaning. His method like the reading of a peaceful sermon is steadfast and powerful and ensures the audience that no movement or saying is lacking. This personality trait of his performance makes it a complete and ideal one. Perhaps an important part of this power in performance is achieved through symbolic and attractive movements of this Pardekhan (curtain-teller) Darvish.

Darvish Hossein uses the spoken word to express the narrations about the gatherings. Poems and harmonious or rhymed and metrical texts are used instead of chanting. The meanings of the stories are transmitted with a narrator's voice. His method is unusual because the elements of his performance need to be so satisfying as to fill in and make up for the lack of singing. This method requires the Pardekhan to know a vast amount of proverbs and different texts. Darvish Hossein has succeeded in establishing his method with his nearly unequalled knowledge of religious text, poetry, literature, ethic and general knowledge, and performed picture-storytelling for several decades with the same method. 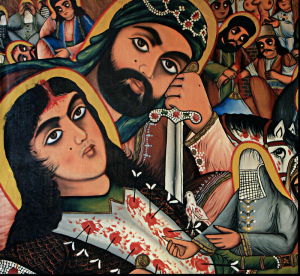 Fatima al-Soghra is ill and so cannot accompany Imam Hussain's (her father's) caravan and has stay in Medina. She suggests that one of the family stay with her. However, it does not become possible, even Ali Akbar, her brother, is forced to accompany his father. During the last moment before the caravan departs, Fatima al-Soghra ask Ali Akbar to write her letter. The various tribulations prevent the sending of the letter until Fatima al-Soghra can stand no longer and in her illness she writes a letter complaining to Ali Akbar. The letter reaches him just before his martyrdom. Ali Akbar answers the letter with his blood on his shroud. After reading the letter, Umm Salama, Soghra's great grandmother, decides not to reveal the contents of the letter in order to save more suffering. However, the sister understands that her brother has been martyred on seeing the bloody dove.