Rajab Ali Salehi (born in 1955) is a prominent Pardekhan. Morshed Rajab Ali Salehi in addition to Pardekhani is one of the acknowledged master of Ta'ziya-khani too. His manner of performing Pardekhani is influenced by Ta'ziya-khani methods. In this method sung phrases appears as type - melodies, so such a vocal structure is predictable for the people who are familiar with this kind of music. This matter causes people to review the totality of the song and even the poetry previously in their minds and therefore to find the need for external expression. In fact the narrations of the Morsheds is a continuation of the thought of people in the word, in this way variety and innovation in performances depends on the peculiarities and sensitivities of each singer. 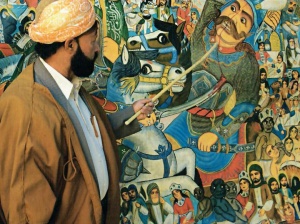 Morshed Rajab Ali has a good voice and is masterful in singing of the good characters (Owlia khans) in Ta'ziya music (sung playing) and by taking up a melody similar to that of Abbas ibn Ali which is in the atmosphere of the intervals of Bayat e Tork and Segah, and with attention to the curtain which involves Abbas ibn Ali, the most dominant melody, is in Segah and Avaz -e Bayat e Tork, Pishdong and First Dong of Mahur and Afshari intervals create surrounding atmospheres. 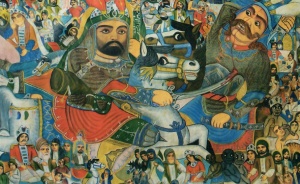 The narrative is of the war of Mared ibn Sodeif with Abbas ibn Ali in revenge of Mared's father in the Siffin or Nahrawan war by Imam Ali. Mared who has four names among the Arabs, Yalyal e Shami, Jahan Pahlevan, Azraq Cheshmrekabi and Mared ibn Sodeif, one day kills two innocent young men. An old man who witnessed the event is upset while telling Mared you unchivalrous one! Go see who your father is and who killed him and take his revenge. Mared goes to his mother, the mother tells him of the murder of his father Borqaye Shami by Imam Ali. He asks about Ali. His mother informs him of Ali's martyrdom. Mared goes to Kabala with the intention of killing Abbas in revenge of his father. Abbas who is leader of Imam Hussain's army now is at war with the army of Sa'd's son. But the story in a tangent to leads to Mared's dealing Abbas three blows of the sword which have no effect and Abbas cuts him in half with one blow of sword. This is the most important scene of the Picture-storytelling.