Mohsen Mirza Ali (born in 1983) is Iranian Pardekhan and Naqqal who began Pardekhani when he was 23 years old.

Mohsen Mirza Ali learned the bases of his art from the traditional curtain-tellers and his mode is influenced by his father, Morshed Hassan Mirza Ali. But the relationships and the conditions of the contemporary life and culture weren't uninfluenced in his performance style. His youth and his being placed between two kinds of contemporary and traditional culture separates his performance from the older performers: use of the cane and movement of the cane from one hand to the other and new forms of movements which involve variations in addition to exaggeration in facial mimics aren't familiar to the traditional curtain-narrators.

The picture-storytelling begins with a tone in Bayat-e Tork but the storyteller's emphasis and temporary pause on the words In parde (this curtain), the Segah tonality is evoked, this also not being permanent and the next Ist (final note) is on the Shahed of Shur or the third note of Segah Pishdong and there is no permanency on any tonality and only the Pardekhan's accents on certain notes corresponded to the equivalent Persian mode during a few moments . However, in general, the tonality of Bayat-e Tork, [1] is more used in this performance, drawing on sentences and phrases of Shur of which its Shahed is on the second note of Bayat - e Tork. During the performance, the singer's voice clearly moves a quarter note higher but the general acoustic atmosphere of curtain-storytelling is maintained. Although enjoying of the variety forms of Iranian musical modes (Dastgah) and songs (Avaz) is usual between some of the distinguished curtain-narrators, but in this case, the momentariness of each of these atmospheres is indication of the youth of the singer on one hand, and the complexity and difficulty of the Pardekhani melodies on the other . In spite of this, the young Morshed, Mohsen Mirza Ali has been able to make himself known among Iran's curtain - storytellers. In order to understand the complexity and depth of the meanings and the stages of teaching the Pardekhans (curtain narrators) and the manners of picture-storytelling which is a kind of Ma'rekegiri, which fuses storytelling and lyrical poetry (Ghazalkhani), it is necessary to refer to authoritative sources. 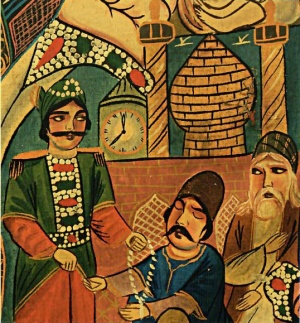 Morshed Mohsen Mirza Ali tells the story of the meeting between Allahverdi and Shah Abbas. Allahverdi is a blind man devoted to Imam Rida, 8th Imam of the Shi'ites. For years he has been wanting to visit his shrine. People know about this and gather some money for his pilgrimage. Allahverdi remains there devoted to Imam Rida in his shrine for 20 years, until one day Shah Abbas arrives there on pilgrimage. Shah Abbas gives Allahverdi his expensive rosary. However, Allahverdi does not accept it because of his gracious spirit since he understands the great value of it. Shah Abbas swelled with pride and said if you receive no healing for your sight after 20 years devotion I will order your death. Allahverdi sees Imam Rida in a dream and his blindness is healed. [2]