Morshed Majnunshah in his performance of the gatherings emphasizes the speech more than the theatrical movements. The series of movements he uses are indications of the portraits, the audience and at times, the sky and a few postures for generally expressing prayer and devotional ceremony, war with hands, death with a general posture of the body, surprise, joy, sorrow with the face and kneeling for expressing the gathering at the bottom of the curtain .

The combination of the sung poetry and spoken prose constitutes his Pardekhani method. In the gathering of the first night of the grave, after the short introductory song, mostly the story is narrated in a spoken voice. In the concluding sentence, the music becomes more pronounced but not to the extent to which Iranian traditional music could be corresponded with, because it is suspended between the spoken word and the singing voice. Morshed Majnunshah in the story of Abbas ibn Ali and Salman al-Farsi uses a kind of vocal music. The range of notes concentrates on the intervals of a limited Dong (tetrachord). The main concentration of the vocabularies on a tone and a general atmosphere suggests the Abuata Avaz. 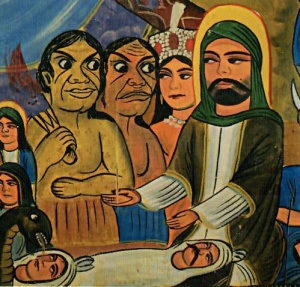 The first story is that of the first night of the grave. The dead man after being cleansed is clothed in a shroud in the mourning ceremony. They pray over him and bury him. The first night of the grave, the angel Mambuhe (angel of death), appears to him in the dark chamber of the grave, smells his body to know whether in the material world he was a sinner or a doer of good deeds. If he had not committed any sins and had followed the religious precepts the holy personages led by Imam Ali would save him. The second gathering tells of Imam Ali and Salman al-Farsi. Imam Ali hits Salman on the chest with a date pit as a child, Salman does not recognize Imam Ali and scolds him. Imam Ali reminds Salman that he had saved him from the lion on the Arjan plain. Salman expresses his total devotion to Imam Ali.