Mohammad Arefian (born in 1936) is an Iranian Pardekhan and Ma’rekegir. His performance is in the manner of the ancients. In this method the motions are clear, distinct and rather predictable. The concentration on the gathering being narrated and the painted faces and repeated indications to the evil personages, using the cane (the holy personages should not be indicated with a cane due to their prestige and dignity) and indicating the holy personages with the hand is one of the classical techniques of the older storytellers. 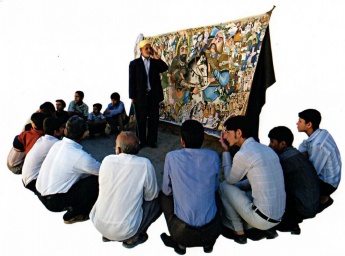 Morshed Aref uses methods of recalling, prayer, Salawat (sending God's greeting to the prophet), to the holy personages and the people, cursing the evil ones, along with other communal behavior during prayers, approving of some and disapproving others and sometimes general questioning and advising, in order to create a relation with the audience.

At the beginning Morshed Aref sings (Besmellaholrahmanorahim) in a melodic tone as most other Pardekhans. His voice continues to the end of the introduction before the main story. After this section spoken narration is used to explain the gathering and short singing is only used at significant parts of the story. In curtain-storytelling three main methods are usual in expressing the gathering.

1- Narration of the whole gathering in song

3- Narration in the spoken word

The first type is specific to Pardekhans who are masters of Ta'ziyekhani (sung playing) and who play the roles of the holy personages. The second type is more prevalent than the other two and is mainly specific to Pardekhans whose main profession is Ma'rekegiri or street performances. These persons might also engage in Rawza-khani and Maddahi on the side of their main profession. And the third and less frequently liked type is that of those who do not have a strong singing voice. At the beginning of the gathering of Sultan e Qeys the melody is of the acoustic atmosphere of Avaze Bayat-e Turk (Daramad intervals) and in

the second section, in the hemstitch of An ke shiran ra konad rubah mazaj... it is performed in the atmosphere of Homayun Dastgah (mode). Sometimes the intervals performed by the curtain-narrators do not perfectly correspond to the intervals of Dastgah and urban music and the only atmosphere which is evoked is that of one roughly corresponding to some Dastgahs or Avazes; this is true of the section sung in Homayun. The Dot of the B of Besmellahand ” Hashemi's Mole" Darvish Aref begins a poem with these words: That dot beneath the B of Besmeallah ( In the name of Allah ) That is the guide to the gateway of Allah on that dot is written the whole of the Koran That is the mole on the lip of Ali the friend of Allah. The poem indicates the relation of the B's dot (in the Arabic alphabet) in the opening lines of the Koran (Besmellaholrahmanolrahim) to the lip of Imam Ali. Thus, the interpretation appears objectively on the curtains of curtain-storytelling, where a mole appears on the portraits of the saints. Imam Ali, Imam Hasan, Imam Hussain, Ali Akbar and Ali Asqar all have moles above their lips known as the Hashemi mole. In Islamic Gnosticism the meaning of the dot and the dot of the B has a multitude of hidden, other wordly and deep meanings, and in the literature a dot and mole are corresponded to each other and a mole is allegory of the dot : On his face his mole is pure Which is the center of the circling surroundings It is from the feeling of the destroyed heart full of blood . That the dot of the mole is painted black The Pardekhans mainly having gnostic and darvish traditions in thinking, at times indicate the deep meanings even if very rarely and fleetingly with subtlety, and this makes their mastery of spiritual language clear. Alongside the singers, the curtain painters too have prepared the background for the manifestation of the spiritual knowledge of the singers. The Hashemi mole is an example which is indicated in Morshed Aref's choice of opening poem.

Sultan e Qeys of India dreams of a dangerous lion. He relates his dream to his astrologers and interpreters of dreams but they cannot interpret it. In order to escape the atmosphere of the dream he goes hunting with his vizier and armies. On the way Sultan e Qeys sees a deer. He orders the deer to be surrounded and warns that if the deer escape the side of anyone, the possessions and life of that person would no longer be safe. However, as if the deer had heard these words escapes past the side of the Sultan ... The Sultan chases the deer but then is faced with the same lion of his dream. While fearing for his life, the Sultan asks his vizier a solution. The vizier encourages him to seek the aid of the idol hanging from his neck ... but the lifeless idol can do nothing. Finally, the vizier who is a Muslim tells the Sultan to ask Imam Hussain for aid. The Sultan brings Imam Hussain's name to his lips ... Imam who is himself struggling at war with Yazid's army, is in the land of Karbala and while having a few arrows in his body he comes to the aid of the Sultan and saves him from the danger of the lion ... Now the Sultan intends to return to the aid of Imam Hussain but the distance is far and the Sultan would not be able to translocate in the same way as Imam Hussain and Imam says to plant the ney in the ground, then whenever blood flows from it, know that I have been martyred... The Sultan sees the blood flowing a while after planting the ney.